What is Nail Fungus?

The risk factors associated with toenail fungus are broadly categorized in conditions that suppress the immune system, transmission of the fungus, and favourable environment for fungal growth, particularly warm and damp environment. Aging is the most common risk factor due to reduced blood circulation, weakened immunity, and longer exposure time to the fungi. Diabetes and foot cancer are also risk factors associated with toenail fungus.

Other factors include tight and non-breathable shoes, increased use of public damp spaces such as locker rooms and gymnasiums. Other factors that increase the risk of onychomycosis are direct trauma to the nail such as nail biting, sex (men affected two times more than women), and family history.

How Nail Fungus can be Treated?

There are three types of treatments for this condition: topical, oral and laser treatments. Topical medications include amorolfine, ciclopirox olamine, and bifonazole/urea. Topical treatments alone are unable to cure onychomycosis, with approximately 10% success rates, because of insufficient nail plate penetration. They may be useful in combination with oral therapy or to prevent recurrence in patients that were cured with other therapies.

Oral antifungal drugs include itraconazole, terbinafine fluconazole. These medications can have up to 50% success rate after several months of treatment. However, they can stress the liver.

Laser treatments have the highest success rates of approximately 90%. This is due to the fact that fungi are susceptible to heat. The heat generated by the Lasers denatures the fungal proteins and disrupts their growth.

Finally, if none of the treatments work or are feasible for the patient, the toe nail can be surgically removed as a last resort.

For those suffering for years with deformed, unsightly and discolored nails due to an infection (nail fungus), there is hope.  At Nell Laser Clinic we use the best laser technology (Cutera Genesis) is proven to be effective to treat the condition and is FDA cleared. Cutera is a leader in Laser technology, worldwide.

How Many Sessions Do I Need?

Depend on the condition you may need 3-6 sessions spaced 4-6 weeks apart. You may not see results for 3+ months, due to slow nail growth since toenails grow at a rate of 1mm per months, the toenails may take 12-18 months to appear normal again. Fingernails grow 2 mm per month thus takes 6 months to be cleared. There is no downtime and, because there is no need for drugs or traditional oral medications, there are no total-body side effects. 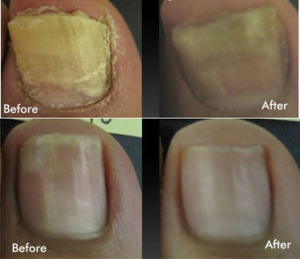