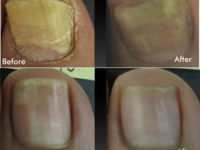 The toenail fungus infection affects 6-8% of the Canadian adult population. Onychomycosis can have significant negative effects on the patient’s emotional, social, and occupational well-being.

Other factors include tight and non-breathable shoes, increased use of public damp spaces such as locker rooms and gymnasiums and immuno-suppressed patients through diseases.

Symptoms during the nail fungus infection include:

What is the most effective Treatment