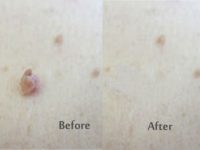 Skin tag is benign, soft hanging skin which most people have at some point in their lives.

The most common areas where skin tags occur are; eyelids, neck, under arms and the upper chest.

They are much more common in middle age.

Although we do not know the exact cause of skin tags, the following are thought to be associated with their appearance:

Skin tags are strongly associated with prediabetes, also called insulin resistance, and Type-2 diabetes. In those with insulin resistance, insulin becomes ineffective at pushing sugar into cells and, as such, the blood sugar builds up and the body keeps producing more insulin in an attempt to normalize blood sugar. Eventually, the pancreas becomes exhausted and diabetes results. We have an epidemic of Type-2 diabetes and early detection can prevent the development of this deadly disease. Diabetics, on average, live 10 to 15 years less than non-diabetics. Dozens of studies show that as few as three skin tags on the body are linked to increased diabetes risk. Research has also shown that those with skin tags have higher cholesterol, triglycerides, blood sugar, and C-reactive protein (CRP) than those without skin tags (all risk factors for diabetes and cardiovascular disease). Those people with elevated CRP, a marker for inflammation in the body, are four times more likely to develop diabetes. So although skin tags look bad, they are actually a warning sign for diabetes that we should not ignore.